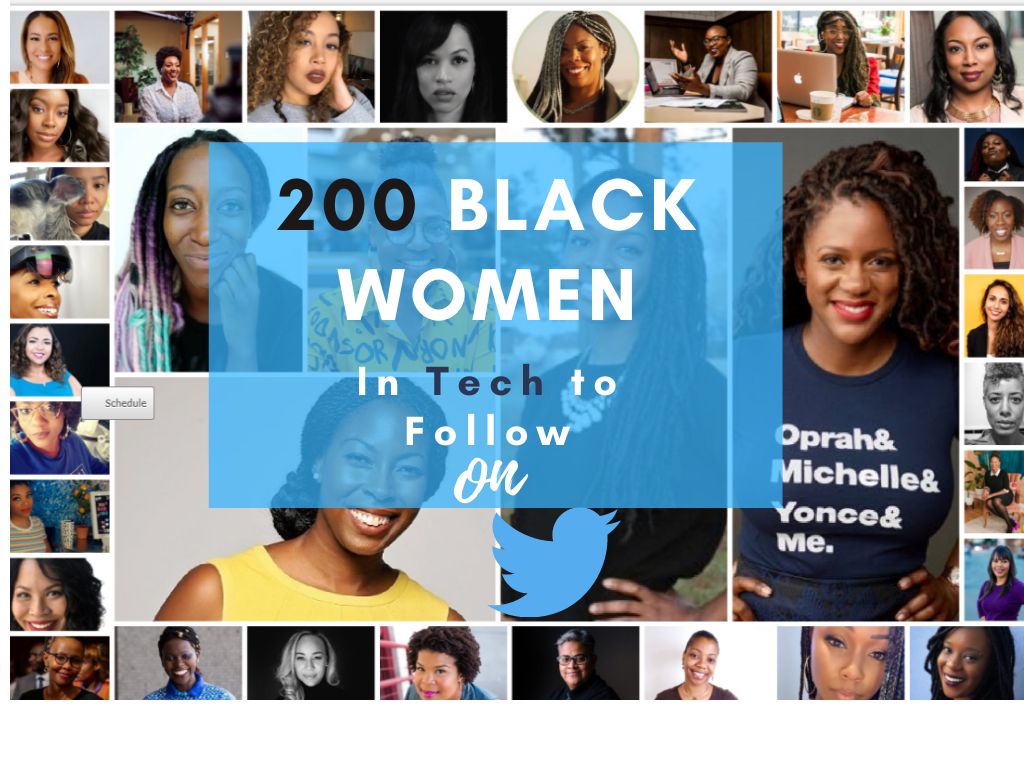 In the unprecedented, tumultuous and challenging year of 2020, Twitter remained a source for news and information-sharing on all things pandemic related, political and tech.
Even while navigating the stress, anxiety and sometimes heartache and heartbreak that was common this year, the 200 women who made this year’s Black Women In Tech to Follow on Twitter list continued to disseminate tips, hacks, insights and knowledge.
On their profiles, they gave of their personal lives while working in the tech industry and they remain engaed with their followers by providing updates on issues and events related to inclusive tech initiatives around their personal community and the world.
Background
The Black Women In Tech To Follow On Twitter list is back thanks to the generous sponsorship of a Black Woman in Tech Boss, Nicole Commissiong, Senior Vice President, Operations of Maryland-based Dynamic Services Solutions.
The list returns after a brief one-year hiatus. The process of curating it every year is a one to three woman operation but last year was not feasible. Previous permeations of the list were released in 2016, 2017 and 2018 previously.
Enter Nicole Commissiong, a government contract powerhouse, who runs one of the few women-lead homeland infrastructure support companies to partner with the United States government and private sector clients for over two decades.
Commissiong’s company, Dynamic Service Solutions, an engineering and Project Management and Emergency Management firm was at one time the only black woman-owned Tier-1
Engineering Furnishing and Installation (EFI) vendor for Verizon in the Mid-Atlantic providing telecommunications and power infrastructure.
Earlier versions of the list received support from the tech community. The Obama Administration’s Office on African American Affair’s Twitter page re-shared the list and over time, several members on the list became Twitter-verified!
The post-George Floyd protest movement drew a renewed interest in re-visiting the ways marginalized communities and groups that have traditionally been ignored, overlooked, underfunded, and not supported.
Black Women continue to represent less than 1% of Venture Capital funding in the tech space and go missing from annual roundups of “Who To Follow Lists” that begin circulating at the end of each year. It was the reason I started this recognition in 2016 in the first place.

“I used to look forward to reading about the wonderful, informed, engaging Black women who made the list every year and was disappointed to see it go away,” Commissiong said. “When asked to help usher in its return, I knew as a Black woman myself who moves and maneuvers in a male-dominated field that I had to step in and offer my assistance.”

Commissiong currently manages dozens of employees and leads several multi-million dollar high impact infrastructure projects in various technology sectors, and more recently, emergency management. Her company’s team is 75 percent women.
She stepped up when no one else would so there could be this latest edition of 200 Black Women in Tech to Follow on Twitter.
Methodology: We selected those who update their accounts regularly, and who usually share news, information, images, ideas and tips related to inclusion, the celebration of diversity in tech and the elevation of underrepresented groups. Ideally, the majority of the content shared by these women is not self-promotional but instructive and shared to edify followers while expressing themselves, their passions and their opinions and authentic selves. We could not add accounts that are set to Private.
What’s New: This 2020, this year, we tried to go even deeper with pure tech and selected more coders, software engineers, front-end developers and code newbies, including several college students and young professionals, as well as innovators and founders who are under 25.
Also this year, to make room for more individuals, we removed all the organizations that previously occupied space on the list.
We celebrate the individuals who are the engines of those groups instead.
We wanted to maintain a robust list of active users of this social media platform’s most informative, influential, and engaging tweeters, so those who have accounts that infrequently tweet were not included this year.
FOLLOW ALL:  If you are on Twitter, you can follow everyone on this list at once by following this Twitter List!
Without much further ado, these were the most active and relevant voices in 2020.
Yours Truly,
Jay Jay Ghatt, Founder and Curator, 200 Black Women to Follow On Twitter

Twitter Bio:“If you have come here to help me you are wasting your time, but if you have come because your liberation is bound up with mine, then let us work together.”

Twitter Bio: she/her | Director of Engineering | Never, ever be afraid to make some noise and get in good trouble, necessary trouble. -John Lewis | 💖💙

Twitter Bio: Entrepreneur|Author|Mom| Co-Founder of Center for Black Innovation @blacktechweek. I have an obsession with traveling, desserts & helping people get on stages.

Twitter Bio: I created the #jesspicks newsletter and can help you get resources and tools to make money from a #sidehustle. Click the link below to see this week’s tips!

Twitter Bio: Full-stack Web Developer |Web design | #BlackTech | #womenInTech | #BlackTechTwitter | —my thoughts are my own and are not tied to any company or corporation—

Twitter Bio: At the nexus of computer science + education + user experience • mastered it, now pursuing a PhD in those things @TempleUniv • Founder of @INTechCamps • 🔺1913🐘

Twitter Bio: I blog for @innov8tivmag. #Founder of @Techncolor I’m passionate abt #Social, #Digital and all things #Tech co organizer of Women of #Wordpress NYC #emailgeek

Twitter Bio: Interested in solving human problems through technology (she/her). So this one time at dev camp… http://github.com/FreedomWriter

Twitter Bio: I help maintain the @nteractio ecosystem, make open source software at @microsoft, and write books and blogs. Dream big and follow through even bigger.

| Host of@gitcutepodcast | she/her | All opinions are my own

Twitter Bio:Tech and games journalist with a passion for good food and better drink. Editor in Chief of Laptop Mag. My opinions are my own.

Twitter Bio: Making #tech easier for all of us @ABC @GMA @siriusxm and with the #60SecondTechBreak & ‘Til Death Do You Tweet

Twitter Bio: 24 ♋️ | Software Developer | Twitch Affiliate @thelivecoders | She/Her | My Story of How I Got into Tech Without A Degree or Bootcamp

Twitter Bio: I ‘m a masterpiece.! #JKUAT Alumni. I tweet about anything. Front-end Developer. Obsessed with #CSS. #A11y #ITSM. Learning to code. #WomenWhoCode.

Twitter Bio: Ph.D. student, Columbia Teachers College. I seek to support my scholars through the development of STEAM programs, so they can think, create, be, do.